How Mark Zuckerberg would market your car dealership

One of our Auto Marketing Experts will be right in touch.

Six or seven years ago only a handful of car dealers in any market were using paid search on Google as a major part of their marketing strategy. What those dealers discovered back then is that by being early adopters they had a HUGE advantage over their lagging competition. Today, it is almost 100% of all dealers spending money on Google’s powerful text-based ad tool and the only advantage a dealer may have is that they have more effective tactics in this crowded space. Right now we are at the same point with Facebook advertising (not just social posting) that we were with Google PPC advertising six or seven years ago — dealers that spend money (and have a sound strategy) on Facebook have a HUGE advantage over their competitors.

So what are the Top Five Reasons to be on Facebook?

Whether you are in the middle of a busy metro or in very rural market, car buyers from 25 to 54 are all over Facebook. In fact, with 1.49 billion members worldwide, and 22 billion ad clicks per year, Facebook is one of the few places where all of the different segments of your targeted audience all congregate.

Don’t just take my word for it. Look at this chart from an article published on MOZ.com, Why Every Business Should Spend at Least $1 per Day on Facebook Ads. 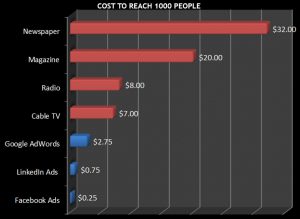 Dealers are spending tens of thousands of dollars on traditional media and are only reaching a part of their targeted market and can’t measure its effectiveness. I’m not saying to pull out of traditional mediums. They can all work together. I just think it is a bad idea to spend big bucks on traditional and omit Facebook all together.

You can target by behaviors, interests, demographics, connections, age ranges, languages or locations and you can layer this criteria on top of each other to ensure you’re getting rid of any questionable out-of-market clickers. For car dealers, you can also add in Polk data to target same brand owners in your market that ARE NOT in your database. Sound like a good idea? I think so.

Do I really need to quote statistics to convince you on the importance of mobile advertising? I don’t think so. That said, it is my opinion that Facebook delivers the BEST Mobile ad units going. They appear completely native to the Facebook newsfeed experience and if done right are incredibly engaging. Other mobile ad units are small, hard to read and really nothing but annoying and unlikely to influence a prospects behavior while surfing on the mobile web.

Reason #5 – The Most Accurate Cross-Device Targeting

If you are like me, and most others that are on Facebook, the majority of your time spent on the social network is on their mobile app on your phone. However, the rare time that you decide to log-in on another computer, Facebook takes the time and asks you to validate the device and browser you used via email. What you are really doing is allowing Facebook to target you on multiple devices.

So why is this important? Well, if someone visits your website on a desktop or laptop which they have told Facebook is connected to their account and you have Facebook retargeting pixels on your site, then you will not only serve ads to that prospect while they are on Facebook on that desktop or laptop, but also when they are on the mobile app on their phone. Powerful.

If you are not advertising (I am not talking about social posting) on Facebook and you are a car dealer, stop what you are doing and find a way to include Facebook advertising in your budget this year. The longer you wait the worse off you will be.

Dealers have lots of choices when it comes to marketing partners. We have been chosen by some of the best because we not only know marketing, but we also know automotive. Like any great service company, our foundation is our team of automotive professionals. Combined our leadership team has over 125 years of experience working in retail automotive, many different OEMs, and for automotive agencies. This allows for us to have a deep understanding of our clients’ needs and goals. Our recommendations come from real life experience and are more than a catchy sales pitch. Our campaigns deliver results; that is why Google has chosen us as a Google Premier Partner and Bing as a Bing Partner.

Why most "SEO" companies aren't worth the money for car dealers

The ever elusive "silver bullet." Dealers across the country are always holding out hope that one exists and there is no shortage of vendors out there trying to keep the dream alive. The most successful dealers in the country know that the only way...